"RandallScottProjects announces our next installment in the Untitled group exhibition series, Untitled no. 6 featuring the works of Stephanie Barber, Ryan Hoover, Benjamin Kelley and Katherine Tzu-Lan Mann. The exhibition will open July 16th and run through August 8th.

RandallScottProjects Untitled Series of group exhibitions consists of an unlikely grouping of artists whose work may, or may not play well with each other. That has not stopped us from doing it anyway. Each artist's work stands apart on its merits, but placed in a group dynamic crates dialogue. The Untitled series is about creating the relationships between artists visually and conceptually."

A big thanks goes out to the sponsors, volunteers, speakers, and co-organizers who made the BioPrinting Breakout such a grat success. The internatinal lineup of experts combined with the great energy and audience at the Baltimore Under Ground Science Space made this a truely unique event.

BioPrinting Breakout is a workshop on bioprinting and 3D tissue engineering designed to bring scientists into the public to talk about their work and kick start new initiatives related to this technology. Expert researchers in this field present their work and lead hands-on demos for an audience of other scientists, engineers, artists, makers and hackers.

More information and videos of the 2015 talks can be found at BioPrintingBreakout.com.

Proposals for BioPrinting Breakout 2016 will be accepted starting in Oct 2015. 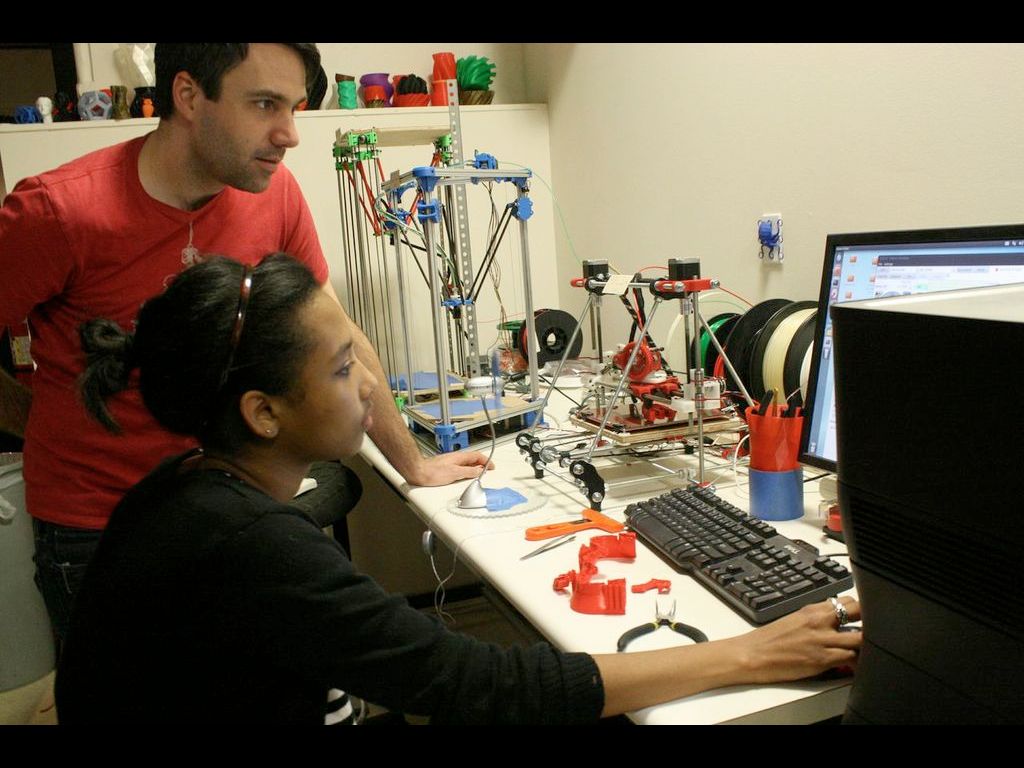 Ben Andrew wrote a great story on the Maker movement which was recently published on BmoreArt. The essay is well researched and it presents projects and perspectives from people active in the Baltimore Maker community and beyond. 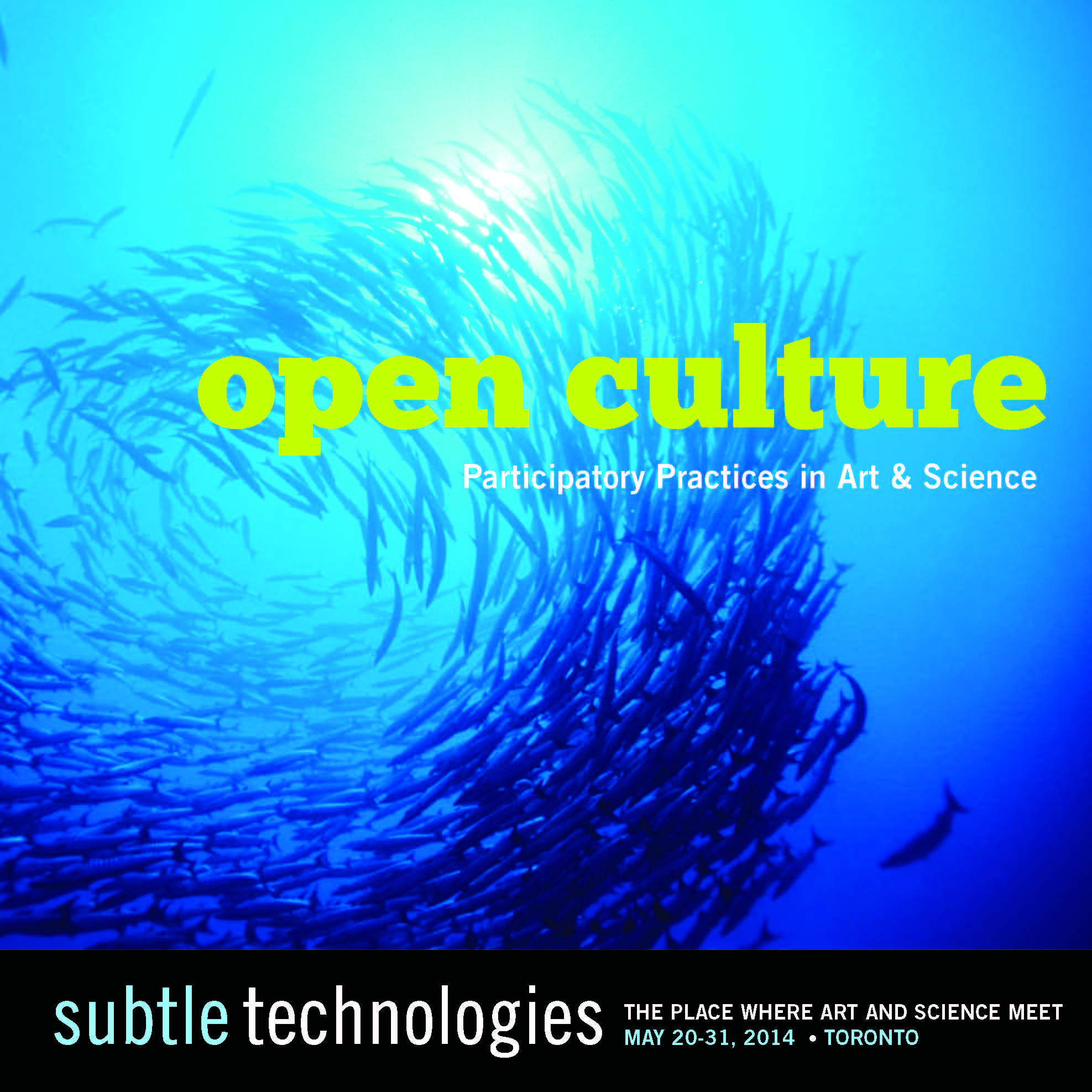 Subtle Technologies is a gathering of scientists, technologists, engineers, artists and the general public. We share cross-disciplinary ideas, explore new technologies, showcase creativity and incubate the next generation of thinkers at the intersection of art, science and technology.

Slides from the talk: BioPrinter Development at the Baltimore Under Ground Science Space 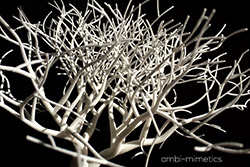 In ambi-mimetics, Ryan Hoover explores the intersection of science, technology and art through 3D printed objects that simulate nature. An extension of his work in 3D printed biological materials, Hoover’s tree-like sculptures and drawings are given their physical form using a written algorithm that mimics natural growth patterns. This complex series of mimicry opens up a dialogue about collapsing and compounding simulations. Hoover writes, “As the limits to what we can make and manipulate fall away like calving glaciers, our ethical responsibilities and our need to imagine the future become even more profound.” 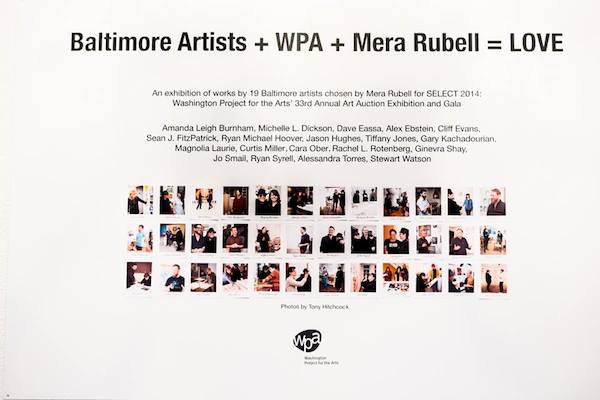 Artist in this exhibition "communicate their notion of land through an inventory of their own observations, real or imagined. What does the contemporary artist see in the landscape? Their interpretations articulate new visions, new connections and speak as much to the illusory, the nostalgic, the fantastic as to the real and the ruined, raising questions about how we interact with the land and what consequences this might have for the environment and, ultimately, the landscape." 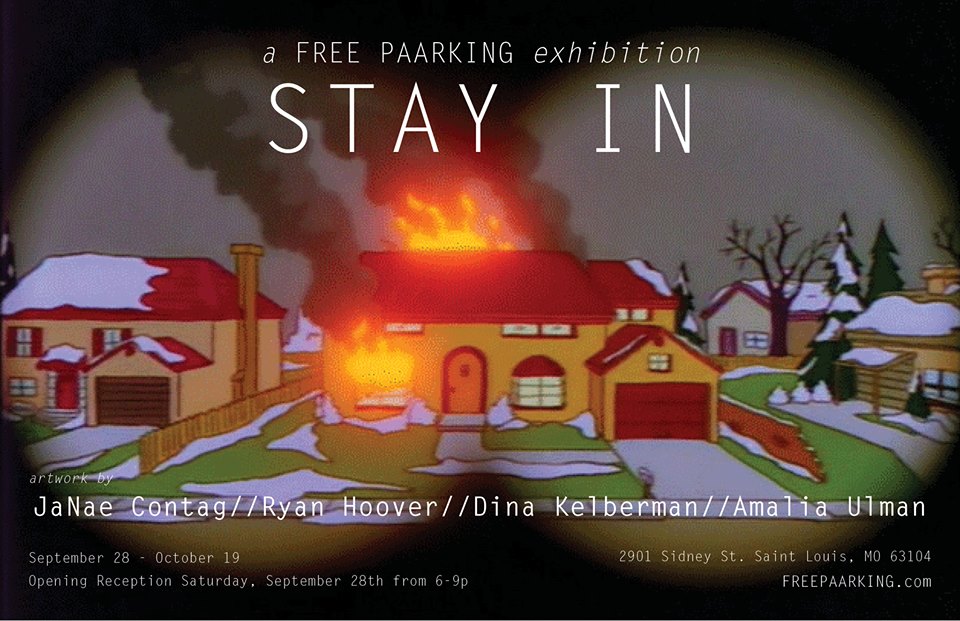 
"Stay In" takes a contemporary look at issues of surveillance and privacy in our digitally mediated lives. 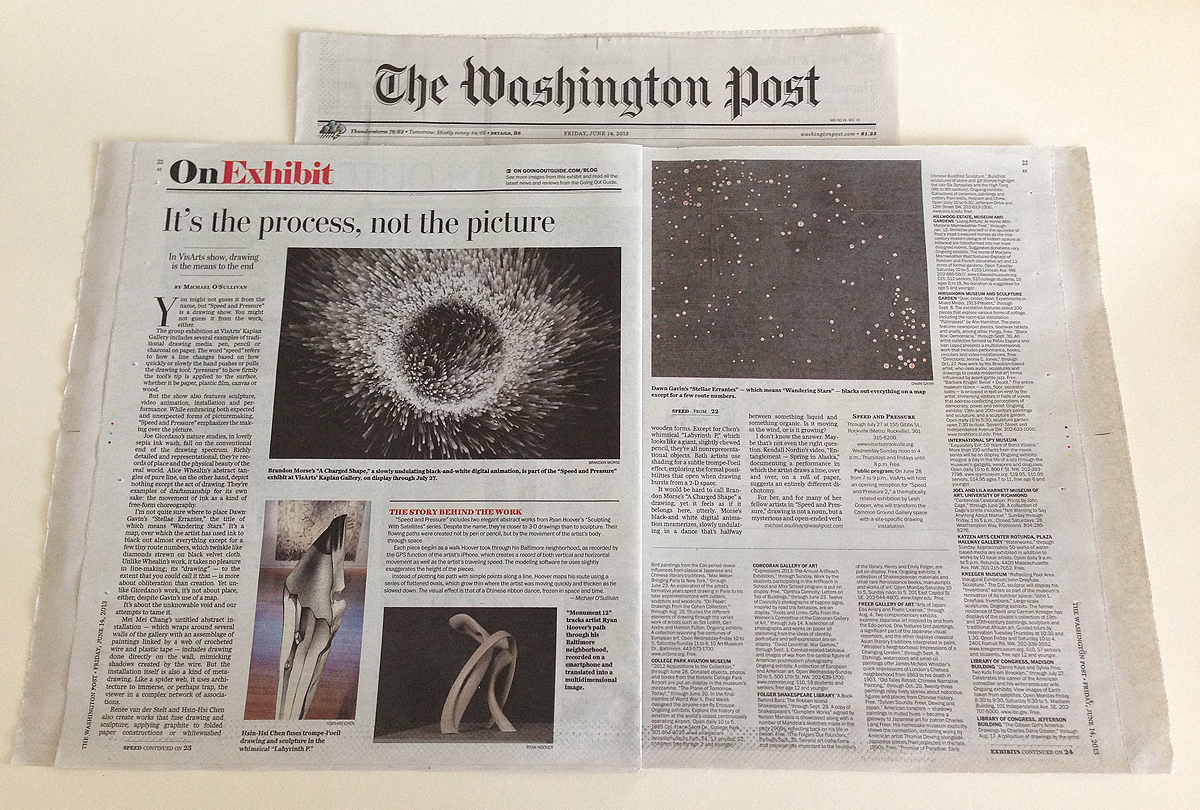 VisArts presents a group exhibition that examines how speed and pressure shape contemporary drawing as an activity and an idea. Ranging from traditional, observational drawing to expanded notions of drawing using algorithmic processes, the artists in this exhibition have in common an engagement with drawing as a primary activity or as the central focus of their creative inquiry..

From the Michael O'Sullivan's thoughtful review in the Washington Post:


You might not guess it from the name, but “Speed and Pressure” is a drawing show. You might not guess it from the work, either.
The group exhibition at VisArts’ Kaplan Gallery includes several examples of traditional drawing media: pen, pencil or charcoal on paper. The word “speed” refers to how a line changes based on how quickly or slowly the hand pushes or pulls the drawing tool; “pressure” to how firmly the tool’s tip is applied to the surface, whether it be paper, plastic film, canvas or wood.
But the show also features sculpture, video animation, installation and performance. While embracing both expected and unexpected forms of picturemaking, “Speed and Pressure” emphasizes the making over the picture.
...
“Speed and Pressure” includes two elegant abstract works from Ryan Hoover’s “Sculpting With Satellites” series. Despite the name, they’re closer to 3-D drawings than to sculpture. Their flowing paths were created not by pen or pencil, but by the movement of the artist’s body through space.
Each piece began as a walk Hoover took through his Baltimore neighborhood, as recorded by the GPS function of the artist’s iPhone, which creates a record of both vertical and horizontal movement as well as the artist’s traveling speed. The modeling software he uses slightly exaggerates the height of the pieces.
Instead of plotting his path with simple points along a line, Hoover maps his route using a series of flattened ovals, which grow thin where the artist was moving quickly and thicken as he slowed down. The visual effect is that of a Chinese ribbon dance, frozen in space and time.

Guest Spot at THE REINSTITUTE is pleased to announce its upcoming group exhibition SELFIE, which opens on June 8, 2013. SELFIE commemorates Guest Spot’s two years in existence and the exhibition will feature select artists with whom we’ve worked in the past.

SELFIE is a group exhibition that examines the origins of commerce: the principle of trade. All participating artists will create work to trade with each other. The experience relies on the ability of artists to self-determine value, while overcoming the major disadvantages of commerce through the double coincidence of wants* of the barter system. guestspot.org 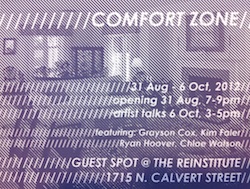 Comfort Zone features four artists that re-purpose elements of contemporary domestic life in subtle and distinct ways. By manipulating our usual associations with familiar scenes and objects, they allow us to subtly shift our position. The interior and private are not safe from intrusion; boundaries between personal and public are not fixed. Beyond all, a sense of comfort is presented as the number one goal, hung out as a proverbial carrot by which all manner of major and minor atrocities can take place. The work in this exhibition explores elements of this ceded ground, along with a variety of ways these boundaries have been crossed. Although all four artists push elements of scale and object hood, all share a willingness to veer from playfulness to formality and employ superior craft in their exploration of these tensions, each one communicating his or her own singular and idiosyncratic worldview.

It is a great honor to be selected as a semi-finalist for the 2012 Sondheim Prize. There are many amazing artist from the region who are on this list. Congratulations to all the other semi-finalists!

There is a video online of the artist talks given at Hamiltonian Gallery on January 12th.

Video of Selin's talk can be watched here.